Self-hosted VPN with Algo and Azure

Algo VPN is an open source self-hosted VPN service. There’s tons of VPN services available but if you want to control what data is collected, used, and/or sold then rolling your own VPN service couldn’t be much easier.

Algo VPN is an on-demand VPN service in the cloud (or on a local machine that is open to the internet) that uses modern protocols and ciphers, and minimal software. Since the VPN is self-hosted the ability to teardown and rebuild couldn’t be much easier.

There’s little configuration and pretty close to “one-click” installs via the Ansible packager.

Listed below are what we will need for the required installation and configuration.

We will need to install the Azure CLI in order for us to get shell access to our Azure environment. This will help automate a lot of the process and we won’t have to make special API keys since we’ll already be authenticated to the Azure environment.

Install the remaining environment and requirements

Configure the users that will be using the VPN service. In order to do this you will need to edit [config.cfg](http://config.cf) file that is located in the root of the algo directory. Use your favorite editor of choice to do this. Substitute my users for whatever your users you want.

Not required: At this point if you want to change the default VM that Algo uses to create the image you can. You will need to change the pre-defined size.

Save the file and exit out of the editor

For Azure environments only:

Log into your Azure environment via the Azure-cli that we installed earlier. Run the command and a window will pop open for you to authenticate to your environment.

Execute the command to start the Algo installation. I ran into some issues when running it without sudo so that’s why we’re doing this here.

You will be prompted to select the cloud provider you would like to install Algo on.

Since we’re installing with Azure we will select 5

Most of the defaults will be more than sufficient for you but just go through them and select what’s more pertinent to you and your situation.

Select the region you would like to install your VPN server. 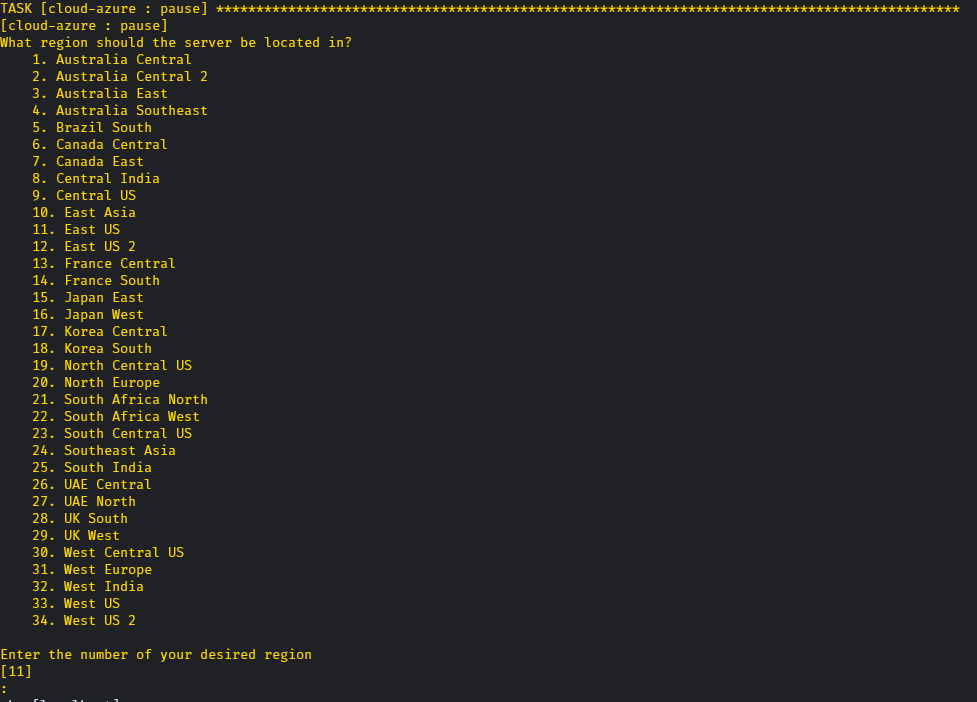 From here the installer will run on its own without much interaction.

There is one caveat though, when it prompts for you to accept the fingerprint, if you don’t do in time it will time out and the installation WILL fail.

At this point if everything went well the installation should have completed successfully.

Connecting via a client

To configure the VPN clients Algo generates WireGuard configuration files for all the users that you specified in your config.cfg file. Those will be located at the following directories:

For WireGuard configuration files used for “importing tunnel(s) from file”

For WireGuard QR code used for authentication on mobile devices

After installing the software on your given device import the tunnel configuration and Activate the tunnel in WireGuard.

Find out how we can be your solution for your technology needs.